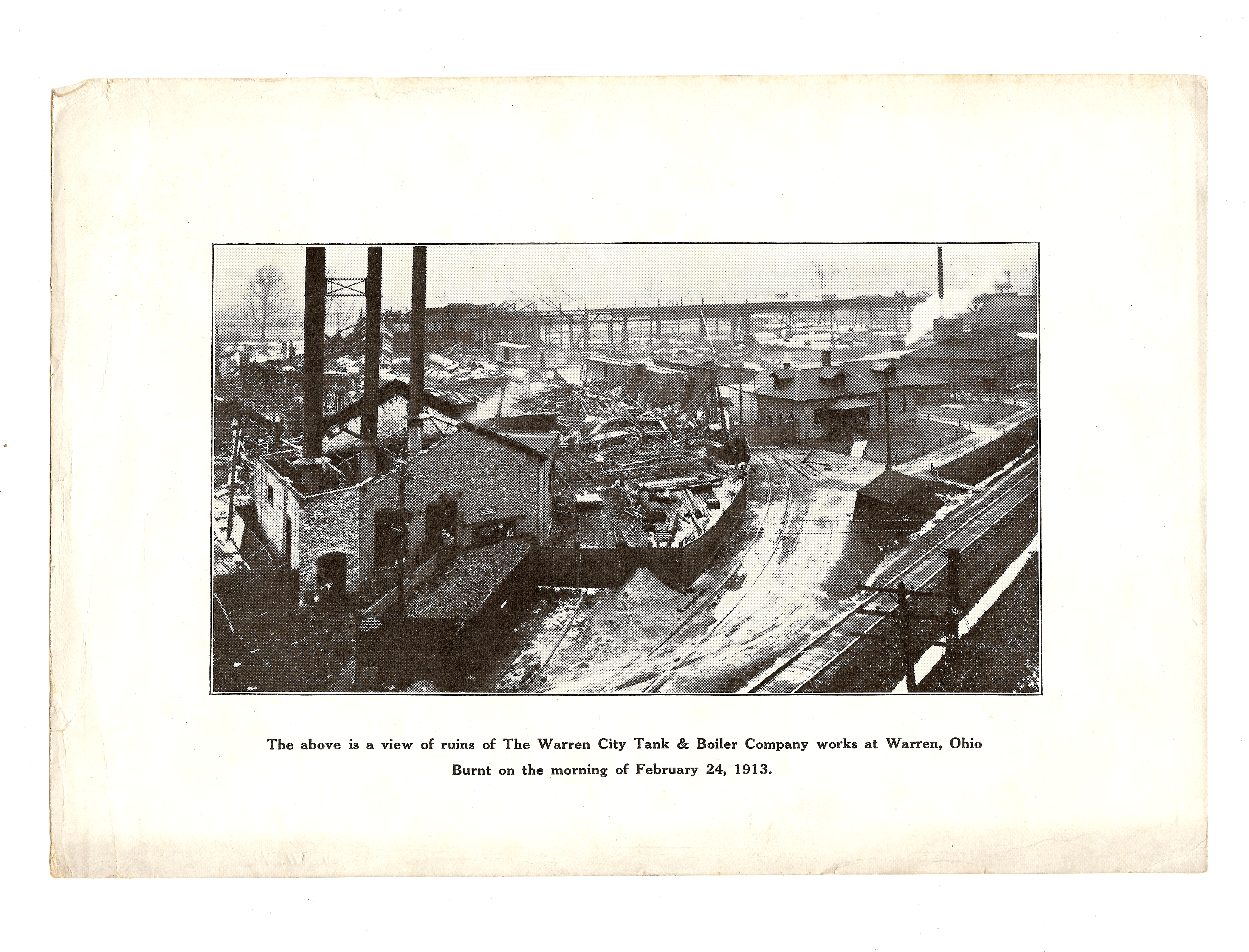 This company was formed in 1893 by Alfred Hughes. The company started out doing repair work on boilers and started with a crew of 25 employees.  Soon after, this company started making tanks for oil field use. Their oil storage tanks were shipped world wide.

There is an interesting anectdotal story about Alfred Hughes,  the founder of the Warren City Tank & Boiler Co.. It seems that Alfred Hughes needed capital to start or continue in this business, so Hughes went to Cleveland to meet with John D. Rockefeller to see if Rockefeller would bankroll Hughes’ business. Hughes went to Rockefeller’s office and refused to leave until  Rockefeller would talk to him. He finally did get into see Rockefeller and Rockefeller was so impressed with him that he agreed to bank roll Warren City Tank & Boiler Co. WCT&B Co. made all kinds of oil storage tanks for oil field use, for tank farms, and even railroads that used oil to fire their steam locomotives. Of, course, this dovetailed pretty well into Mr. Rockefeller’s oil business.

In 1921 a fire destroyed the plant, so the plant was rebuilt and expanded. In addition to making boilers, the company also continued to make tanks for railroad tank cars and oil storage tanks. The  German  American Tank Car Co. was right next door (GATX).  Warren City Tank & Boiler Co. made the tanks and the German American Tank Car Co. made the frames. Another Warren company, the Trumbull Manufacturing Co., on Warren’s south side, made all the castings and other hardware for the tank cars. There is, at least, one tank car still in existence that was jointly made by Warren City Tank & Boiler and GATX at Warren, Oh. This car was made in 1910 and is stored at Pasco, Washington. It has been used by the U.S.Government in firefighting service.

About 1940 the Warren City Tank & Boiler Company was sold and renamed the Warren City Manufacturing Company. During World War II this company made landing craft for amphibius landings. After the war the plant became a part of the McKay Machine Co.

Also, about 1940 The General American Transportation Corporation built a new, state of the art tank car factory at Masury, Oh. and merged with the Sharon Tank Car Company and the Pennsylvania Tank Car Co. The plant carried on business for many years. It was known for making the “pregnant whale” tank car. That car was built in 1965 and could carry about 60,000 gallons of anhydrous ammonia or liquid petroleum gas. It was the largest tank car in the world. After building and repairing tank cars for many years, sometime after 1975 the Masury plant of GATX was closed.