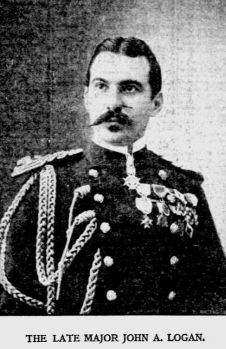 Major John Alexander Logan, Jr. was born in Carbondale, Illinois in 1865.  His father, General John A. Logan(1826-1886) was a General during the Civil War, a US Senator, and a Vice Presidential candidate.   His mother Mary Cunningham (1838-1923) was a writer and editor who was born in Missouri.

In 1884 John A. Logan ,Jr. came to Youngstown, Ohio to run the Carbon Limestone Company with his father’s friend Chauncey  Andrews(1823-1893) .  He purchased land in Liberty Township and built the Oriole Stock Farm where he bred and raised hackney horses.

In 1887 he married Edith Andrews(1865-1953) the daughter of Chauncey Andrews. They  were married at the Andrews Mansion on Wick Avenue which is where Ursuline High School is now. They purchased more  land in Liberty Township and built  a 10,000 sq ft mansion in 1895. The home still stands today on Loganway Dr. in Liberty Township.

John A. Logan was a military commander and  led his troops during the Philippine Insurrection.  He died in combat  on November 11, 1899. He was 34 years old.  His funeral was held in Youngstown on February 7, 1900 and he is buried in Oak Hill Cemetery. It took three months to transport his body from the Philippines to his resting place in Youngstown.

They had 3 children, John A. Logan III, Mary Louise, and Edith.