Joseph Badger was one of the first and most prominent Congregational itinerant missionaries in the part of northeast Ohio first created and settled as the Connecticut Western Reserve.

Born in 1757, Badger was a Revolutionary War veteran from Massachusetts who studied theology at Yale. In 1800, the Connecticut Missionary Society recruited Badger to travel to this wilderness area to preach the gospel.

Badger rode off alone on horseback through the November snow, crossing mountains and icy fords to get to Pittsburg before finally reaching a little group of settlers in Youngstown in late December.

He called them together and “preached a lecture,” then hopped back on his horse in January 1801 and kept going. As his journal recorded, in the days ahead he delivered sermons to the handful of people he encountered in Hopewell, Neshannoc, Vienna, Hartford, Vernon, Warren, Canfield, Deerfield, Boardman, Atwater, Poland, Mesopotamia, Windsor, Mantua, Aurora, Hudson, Ravenna, Newburg, Painesville, Cleveland, Chagrin, Mentor, Euclid, Harpersfield, and Austinburg.

By the time he stopped preaching decades later, Badger had blazed a trail as one of Ohio’s most famous circuit-riding preachers. As his own journals reveal, his efforts on behalf of religion were almost superhuman. He traveled incessantly from settlement to settlement, on terrible roads, or no roads at all, through snow and rain, crossing swollen rivers and fending off wild animals as he went. And everywhere he went, he preached, visited and nursed the sick.

The reserve was a strip of largely virgin forest and swampland that extended south from the shore of Lake Erie to Youngstown, and ran 120 miles west from the Pennsylvania border.  The pattern of remote settlements that Badger encountered within it was the natural result of the Connecticut Land Company’s decision to sell shares of land all across the reserve at the same time.

Each family, or each little party, followed the township lines established by surveyor Moses Cleaveland in 1796 until they reached its designated spot. There, in the vast loneliness, they chopped out a hole in the forest, erected a cabin, planted a few acres of corn or wheat and struggled to stay alive.

Months after Badger arrived to the Reserve, he returned to Connecticut to give a report to the Missionary Society leaders. They were so impressed with what he had done they sent him back, this time with his wife and six children. Before they left, Badger pondered in his journal about the sacrifices he and his family were about to make:

The subject of removal to a distance of six hundred miles, began now to fill our minds with very serious reflections. We could carry no furniture excepting a few light articles such as brass utensils for cooking, clothes and bedding, with a small supply of table furniture. Our family of six children must now be taken from school, to grow up in the woods without any advantage or even a common school, for years; and in circumstances extremely difficult to make them or ourselves comfortable with clothing. But we concluded to submit our cause to Him who feeds and clothes the lilies of the field.

In 1802, Badger arrived in Austinburg  where he built the crude cabin where his wife and children were left most of the time to fend for themselves. It was also in Austinburg that Badger established the first church in the Connecticut Western Reserve.

After the family cabin was gutted by fire, Badger moved his family to Ashtabula. During the War of 1812, Badger became a chaplain for soldiers in Ohio as well as a postmaster for the Army. He died in Perrysburg in 1847, but left a journal of his missionary activities that was posthumously published.

More than a hundred years after his death, a rural school district made up of four townships in northeast Trumbull County (Gustavus, Kinsman, Vernon and Hartford) was named in his honor. 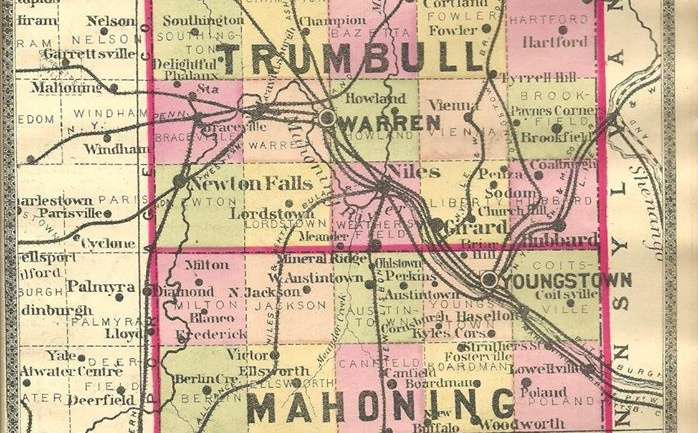